After the presentation of the Judas Priest timeline, you can also listen to the playlist of videos from the period 1969 – 1980.

An earlier band with a different line-up had been formed in the West Midlands area in 1969 by Al Atkins (lead vocals), Bruno Stapenhill (bass), John Partridge (drums), and John Perry (guitar).

Perry was killed in a suicide-related car accident, according to Al Atkins, shortly after the band’s formation and was subsequently replaced by Ernie Chataway. Stapenhill came up with the name Judas Priest from Bob Dylan’s song “The Ballad of Frankie Lee and Judas Priest” and they rehearsed at his house in Stone Cross. The band played their first gig on 25 November 1969 at The George Hotel in Walsall and then toured Scotland in December 1969 and January 1970.

The group disbanded in April 1970 after their last gig on 20 April at The Youth Centre in Cannock.

The line-up that took over the name of Judas Priest included lead guitarist Kenny “K. K.” Downing, bassist Ian ‘Skull’ Hill and drummer John Ellis. The first two had known each other since early childhood, growing up on the Yew Tree estate in Walsall and became close friends in their early teens, when they shared similar musical interests (Black Sabbath, Led Zeppelin, Queen, Deep Purple, Jimi Hendrix, The Who, Cream, The Yardbirds) and learned to play instruments.

The band was founded in October 1970 in Birmingham. They agreed to join with Atkins, who suggested using his old band’s name and rehearsed at Atkins’ mother-in-law’s house in Stone Cross.

With Downing as acting leader, the band moved away from their original blues influences to play hard rock.
The quartet played around Birmingham and the surrounding areas with various drummers sometimes opening for bands such as Budgie, Thin Lizzy, and Trapeze.

Financial difficulties and problems with their management, Tony Iommi’s company, IMA, led to the departure of Allan Atkins and drummer Chris Campbell in May 1973. At the time, Ian Hill was dating a Walsall woman who suggested her brother, Rob Halford, as the band’s singer. Halford joined them, bringing drummer John Hinch from his previous band, Hiroshima. This line-up toured the UK, often supporting Budgie, and even headlining some shows in Norway and Germany. 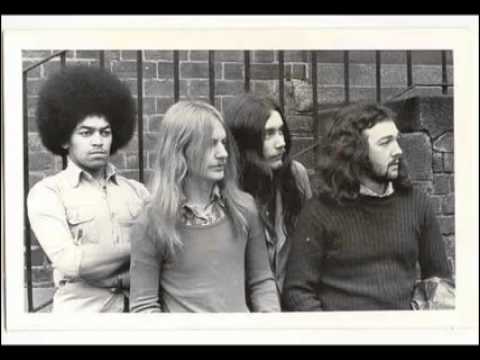 Before the band entered the studio to record their first album, their record company suggested they add another musician to the line-up. As Downing was reluctant to incorporate a keyboard or horn player into the band, he chose another lead guitarist, Glenn Tipton, in April 1974, from the Stafford-based Flying Hat Band as their new member.
In August 1974, the band released their debut single “Rocka Rolla” and followed this a month later with an album of the same name.

Technical problems during the recording contributed to the poor sound quality of the record. Producer Rodger Bain, whose resume included Black Sabbath’s first three albums as well as Budgie’s first album, dominated the production of the album and made decisions with which the band did not agree. Bain also chose to leave fan favorites from the band’s live set, such as “Tyrant”, “Genocide” and “The Ripper”, off the album and he cut the song “Caviar and Meths” from a 10-minute song down to a 2-minute instrumental.

The Rocka Rolla tour ran from 10 September 1974 until 28 December 1975. This would be the band’s first international tour as they made their first European visit to Denmark, Sweden, the Netherlands, and Norway.

This tour introduced Glenn Tipton from The Flying Hat Band as an added second guitarist, who joined the band during the recording of Rocka Rolla and also new drummer John Hinch since his arrival in 1973.

Rocka Rolla (1974) has been for the most part dismissed by the band and none of its songs were played live after 1976 except for “Never Satisfied”, which was revived during the Epitaph Tour in 2011. 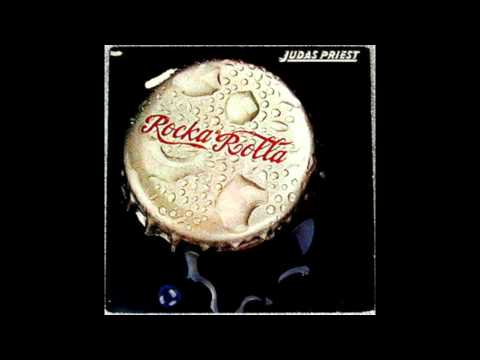 The band participated more in the production of their next album, recorded during November and December 1975, and chose the producers themselves. The result, album Sad Wings of Destiny. 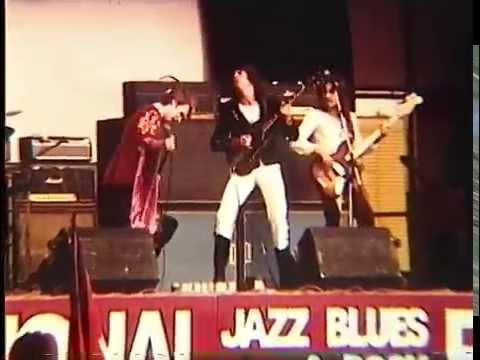 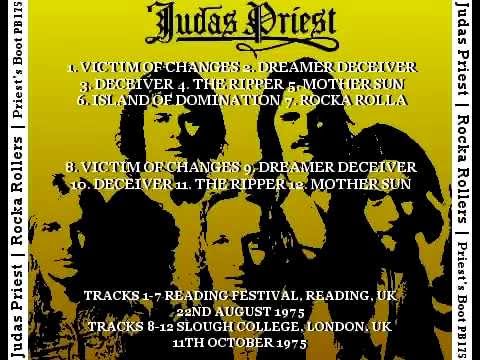 Album Sad Wings of Destiny (1976), included a variety of old material, including the aforementioned stage favorites and immediately shifted the band from a psychedelic sound to straight gritty metal with the opening track, the progressive epic “Victim of Changes”. This song was a combination of “Whiskey Woman”, a stage classic from the Al Atkins era of Judas Priest, and “Red Light Lady”, a song that Halford had written with his previous group, Hiroshima.

Adrien Begrand, writing for PopMatters, claimed the song changed the course of metal history. The guitar work is noted as well, Bob Gendron praising the song’s “landslide riffs” in the Chicago Tribune. The song has come to be regarded as one of the band’s classics, and Martin Popoff listed it at #17 in his “Top 500 Heavy Metal Songs of All Time”.

single from the album Sad Wings of Destiny
”The Ripper”

single from the album Sad Wings of Destiny”Tyrant”

single from the album Sad Wings of Destiny
”Deceiver” 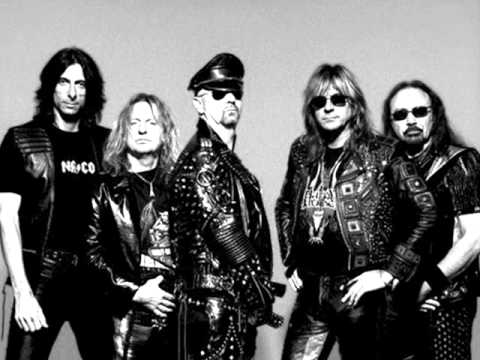 Their next album, 1977’s Sin After Sin, was the first Priest record under a major label, CBS, and the first of eleven consecutive albums to be certified Gold or higher by the RIAA. With the termination of their contract with their previous label Gull, the band lost the rights to their first two albums.

Sin After Sin was produced by ex-Deep Purple bass player Roger Glover, and the band chose to use session drummer Simon Phillips for the recordings.

The band also fully embraced an aggressive metal sound with this release, significantly toning down the arena rock and blues rock influences shown in their past work, and the group achieved widespread popularity on the radio stations for their first time, oddly enough with their hard-edged version of Joan Baez’s song “Diamonds & Rust”.

The progressive rock influences from the previous two albums were toned down on this album; however, these influences are still evident, as in the multi-sectioned “Sinner” and “Let Us Prey/Call for the Priest”, the complex lyrics, and in the Gothic ballads “Last Rose of Summer” and “Here Come the Tears”. These influences would further dissipate in their next album Stained Class before being completely abandoned afterward.

single from the album Sin After Sin
”Diamonds & Rust” 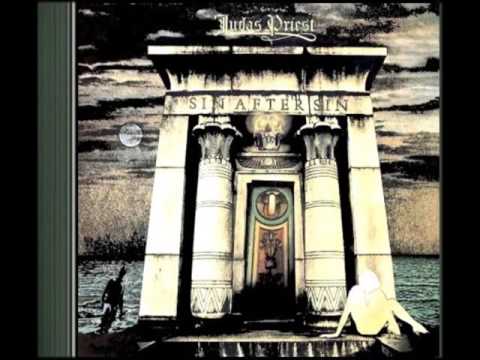 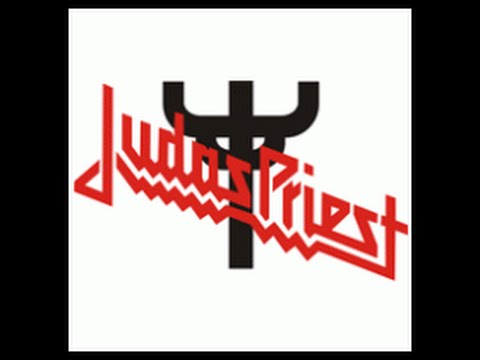 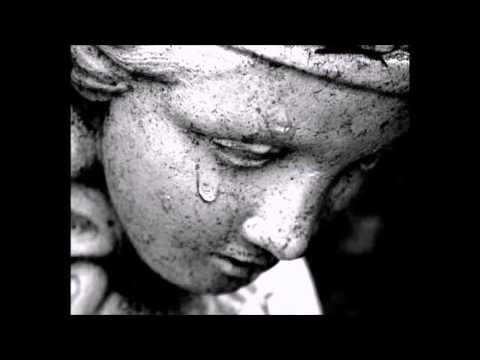 Stained Class is the first of three albums to feature drummer Les Binks. It gained notoriety for its dark lyrics and themes, as well as 1990 civil action trial where the band was accused of backmasking that led to the suicide attempts of two teenagers. Stained Class was ranked as the greatest Judas Priest album was described by Steve Huey on Allmusic.com as “Judas Priest’s greatest achievement.”

While this album still had dark undertones, it was more grounded in realism. This was reflected in their change of stage costumes from flowing Gothic robes to leather, but also may have been inspired by the rising punk and New Wave movements.

Glenn Tipton said in a contemporary interview that “I believe we are part of the New Wave. After all, we’re fast, aggressive and exciting, which is what it’s all about.” Tracks such as “Burnin’ Up” and “Evil Fantasies” are replete with S&M themes while “Running Wild” is about late-night partying and “Before the Dawn” a depressing ballad.

“Hell Bent for Leather” reflected their newly adopted leather costumes as well as Rob Halford’s soon-to-be-trademark entrances on stage in a Harley-Davidson motorcycle.

The lyrics were simplified a bit from the band’s previous albums and adapted more into mainstream arena rock, the instruments retained their characteristic aggressiveness with heavier guitar riffing and elements of blues influence returned on some songs. Killing Machine was markedly improved from Judas Priest’s earlier albums, which were criticized for having excessively flat sound, and would be further refined for their next and breakthrough album, British Steel.

single from the album – Stained Class
”Better By You, Better Than Me”

– released: January 1978
A-side
Better by You, Better than Me
B-side
Invader

single from the album – Killing Machine
”Take On the World” 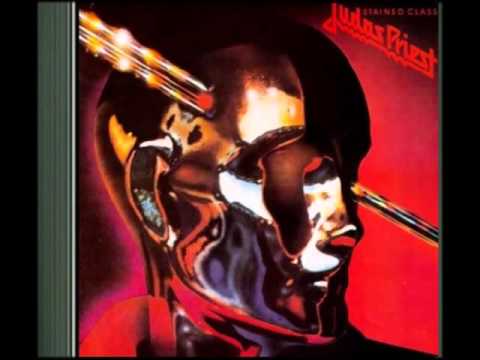 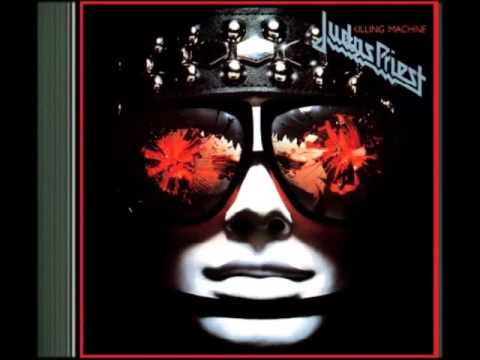 Unleashed in the East is Judas Priest’s first live album, recorded live in Tokyo, Japan during their Hell Bent for Leather Tour in 1979. It was released in September 1979 and became the band’s best-selling album up to that point, reaching the US Top 100 and the UK Top Ten, eventually the album became one of the five Judas Priest albums to gain an RIAA platinum certification. It is the first Priest album to be produced by Tom Allom who would remain at the helm for the next decade for the band, and the last release to feature drummer, Les Binks.

live album
”Unleashed in the East”

Judas Priest - Unleashed in the East (1979) track listing and members